People of the Camp Cup 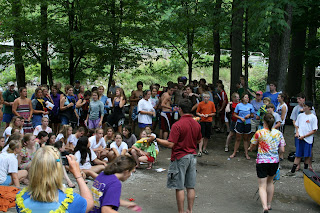 One of the giant reasons the Alzar School gets so excited to help put on the Camp Cup Challenge is the chance to surround ourselves with dynamic, fun, committed people. Besides the 112 kids the event served this year, there were the forty-four volunteers from the 13 participating camps. These camp counselors, program heads, photographers, etc are all very committed to the idea of getting kids interested in the outdoors, through the venue of paddling. Having worked at a summer camp, we know the work is hard, the pay isn’t great, and that you have to give up a lot of personal time (and space) to help these kids. That’s why it’s so impressive to see volunteers standing at the bottom of Nantahala Falls with throw ropes all day, sweating it out in the heat to time runs, or setting up lunch. The good news for the volunteers is that they get more than personal satisfaction out of the event. I saw numerous camp counselors exchanging greetings, making plans to paddle together in the future, and sharing laughs. We can’t name all the volunteers here, but can’t extend a big enough “thanks” for all their help. The event would truly be impossible without them.

At this year’s Camp Cup Challenge, we were fortunate enough to have some of whitewater’s “celebrities” there. What’s really incredible about this is that these folks spend a huge majority of their professional time on the river, yet still are wildly enthusiastic to haul their boats up to run those kids through the course over and over. And, they’re humble enough to man a throw rope if necessary, to wear goofy leis, and to give free advice to young paddlers. We had coaches and Olympic athletes, paddling heads from rival kayak schools, folks involved with two of the US’s major paddling associations (the ACA and the USACK). It is rejuvenating to see folks who maybe sometimes have competing interests get along so well and have fun, all to make this event a great thing for the young paddlers. That’s the spirit of whitewater, one of the reasons the Alzar School is so passionate about hooking kids into the outdoor scene.

A GIANT force behind the event was the American Canoe Association – Dixie Division (http://www.dixiedivision.net/). Once again, they were the generous host of the event, providing insurance, securing the Special Use Permit, and significantly upping the budget to make sure every kid got a healthy, delicious lunch. President Gordon Black was on hand, supervising safety at the bottom of the Falls with fellow rescue guru, Sam Folkes. These two titans of whitewater were pretty cool about giving responsibility to the younger counselors, and keeping the event about the kids. It was so great having them there!

As always, the Nantahala Outdoor Center (www.NOC.com) was a huge platinum sponsor for the event, making it possible by allowing us to use their incredible facilities. They also contributed financially, making it possible for each kid to go home with a sweet t-shirt to remember the event by and providing prizes. And, best of all, we had the support of Olympian Wayne Dickert, whose official job title is “Ambassador for the NOC.” We’ll never forget watching him hike his canoe back up in the rain during the training day to run more kids through the slalom course (while we sheepishly wolfed down dinner at the restaurant). You won’t meet a better ambassador to the NOC or to the sport of whitewater paddling than Wayner (as he is affectionately known). Wayne was backed up by the whole NOC staff, who were extremely positive about the event and supported us with whatever needed to happen. A big shout out to Phillip, who helped hang gates, get bibs, wade through the icy water, etc.

Another pillar of the Nantahala Gorge was also immensely present in the form of the lovely Juliet Jacobsen Kastorff from Endless River Adventures (http://endlessriveradventures.com/). Juliet escorted so many kids through the Falls on the training day, it’s impossible to keep track. She also helped Pablo coach kids in the gates, proving that, while she might 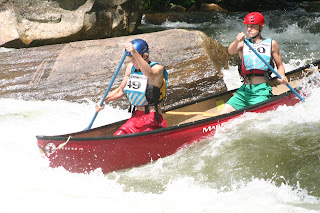 not be a slalom racer, she sure can coach! ERA not only provided Juliet’s stellar coaching, but took pictures, provided a TON of amazing prizes for the giveaway at the end of the day, and more.

Joe Jacobi (www.joejacobi.com) was present for the event day again this year, offering kids advice for running the gates and documenting the day through video and tweets. We’re sure he’ll have a commentary up on his site (see above) soon. With Wayner and Olympian Pablo McCandless, he also participated in the Counselor Cup, giving the kids a lunch time entertainment.

Last, but certainly not least, we had the coaching phenom Pablo McCandless in the house, imparting the lessons he picked up in Beijing last summer. What most of the racers didn’t know is that Pablo was up at 7 AM to wade across the river to hang gates for the event. We’re doing our best to get Pablo to work with the Alzar School on our “Rivers of Chile 2010” expedition this December, so keep your fingers crossed that the dates and stars align to make that happen. Pablo worked with US Junior Team Coach Rafal Smolen (also there to help coach the kids) to help spread the word about what kids can do to become more active in the sport of slalom kayaking and canoeing.

Wow! As you can tell, a lot of great folks (many unnamed) came together to make the Camp Cup Challenge 2009 a success.